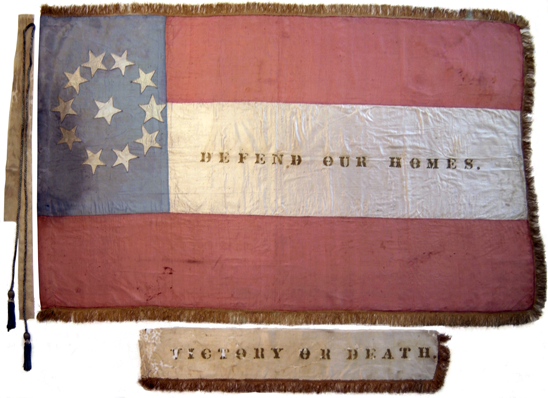 This flag of the Confederate States of America, believed to have been constructed in the summer of 1861 in Rockingham County, North Carolina, was donated to the Rockingham County Historical Collections in 1980. The unusual eleven star flag dates from 1861, after the attack on Fort Sumter, when the original seven Confederate states (South Carolina, Mississippi, Florida, Alabama, Georgia, Louisiana and Texas) had been joined by Virginia, Arkansas, Tennessee and North Carolina. According to D. Cannon in The Flags of the Confederacy, the eleven star flag would have been official when Tennessee and North Carolina were admitted to the Confederacy in July of 1861.

The flag measures 44 inches high by 70 inches wide and is constructed of silk, hand-stitched together in panels. There is a layer of plain-woven off-white cotton between the silk layers. In the blue canton there are 10 stars in a circle surrounding a single star. The stars are appliqued with a satin-weave white silk with a decorative, narrow silk braid sewn around the perimeter. There are two red bars with a white bar in the center. It is edged on 3 sides with gold fringe and includes the slogan "Defend Our Homes" stenciled on the center white bar, and a separate small banner, 7 inches by 38 inches, with the slogan "Victory or Death." Accompanying the flag is a blue and white silk cord with tassels at each end.

The flag was passed down through the family of Lieutenant Colonel Andrew J. Boyd. Boyd enlisted on June 3, 1861, as a lieutenant in Company L, 21st North Carolina Regiment. He became captain of this company and was then transferred to the 45th Regiment, created during the 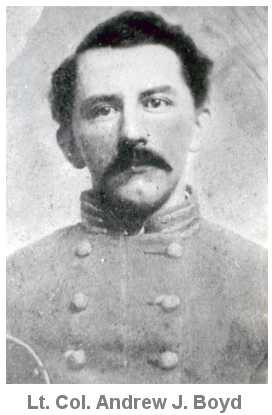 It is believed that the flag was for ceremonial purposes and never flew in battle. It's exact whereabouts during the war are undocumented, but it likely remained in Rockingham County. The existence of the flag is documented in the September 3, 1897 issue of the Reidsville Review. An article appeared under the headline "Defend our Homes" and a smaller headline "Under This Inscription did Old Confederates Battle." Within this article, which was an account of a Confederate soldier reunion attended by an estimated 4000 veterans and citizens, is a reference to a flag flown for the event:

"Over the stand, erected for the speakers, floated a Confederate flag, aged, tattered and torn. The inscription, "Defend our Homes" in bronze letters was at all times in plain view. It was for this that many a soldier, who was present on this occasion, had battled; many of them had fallen from the ranks, wounded, while by them lay their dead comrades."

Restoration and preservation of the flag, completed in 2007, was made possible through the generous funding of the Rockingham Community College Foundation. The "Stars and Bars" is currently housed in the Historical Collections Room of the Gerald B. James Library.